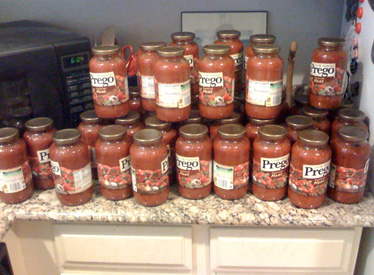 But I make it a habit to check the price of spaghetti sauce every time I go to the store. We go through 3-4 jars of it a month (making things like spaghetti, chicken parmesan, and lasagne) and so I like to buy it when it’s on sale. I figured I would pick up a few jars if it was at a decent price in addition to the orange juice.

Stocking up like this is only a good deal IF:

Now we have a smallish kitchen (maybe 8×9?) so the majority of our spaghetti sauce is now residing in our linen closet. There was plenty of room in there, so why not? I figure there’s no rule that says food sealed in glass jars has to stay in the kitchen.

The only way this deal could have been better is if I’d had some 50 cent off coupons for Prego. That would have made them free with doubling. But I’m very happy with my bargain. That’ll save us about $90 over the coming year.

Oh, and I did remember the orange juice.

Simple Ways to Save Money on the Cost of Travel

Is Hiring a Moving Company Worth the Cost?

Scroll To Top Skip to content
PRESS ESC TO CLOSE