Of exit strategies and small businesses

The New York Times posted an article called Given a Shovel, Americans Dig Deeper Into Debt recently. It describes the story of how one woman got into debt, along with some of the changes to the lending industry over the years.

This change in particular was shocking:

“But behind the big increase in consumer debt is a major shift in the way lenders approach their business. In earlier years, actually being repaid by borrowers was crucial to lenders. Now, because so much consumer debt is packaged into securities and sold to investors, repayment of the loans takes on less importance to those lenders than the fees and charges generated when loans are made.”

The idea that a lender might not even CARE about whether or not a borrower had the ability to repay them was almost unbelievable. Going from a business model where money is lent at a reasonable rate with the expectation of being repaid, to one where money is lent with as many fees as possible with the expectation of quick profit and zero long-term responsibility or consideration of repayment is a fundamental shift. Sadly, corporations often mimic the worst traits and tendencies of humans. Short-term thinking typically produces short-term results and long-term disasters. 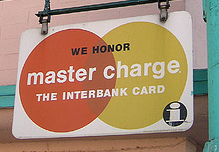 Another powerful change to the credit industry has been more subtle: removing the stigma of using a credit card. (Some of you might be thinking “what stigma?” right about now, which only goes to show that the campaign has been successful.)

“Eliminating negative feelings about indebtedness was the idea behind MasterCard’s ‘Priceless’ campaign, the work of McCann-Erickson Worldwide Advertising, which came out in 1997.

I remember one particular childhood shopping trip with my mom. We were in a department store, and she wanted to buy something for the house we’d recently moved to.

“How would you like to pay for that?” asked the clerk.

I could barely hear my mom’s answer. “MasterCharge,” she said, as she pulled the card out of her billfold.

“What’s MasterCharge?” I piped up. “It sounds like an animal. Why don’t you just write a check?”

She explained that you needed to have money in the bank to write a check, and that MasterCharge was a way to pay for things later.

That made an impression on me. No money in the bank? Ow. Were we ok? Plus she clearly felt uncomfortable about using it.

Of course, MasterCharge is now MasterCard, which has morphed (if you believe the advertising) into an accepted way to get the good things in life. Other credit card companies have cashed in on the metamorphosis too, turning credit into the appearance of something elite and exclusive. There are gold cards, platinum cards, mysterious black cards, and more.

Me, I imagine that people must think I can’t afford the things I’m buying when I use my DEBIT card (or my American Express) to buy something. I think a little stigma can be a good thing in this instance.

How to Save Money on Vacation Without Compromising Your Experience

3 Tips for Balancing Your Busy Schedule With Your Fitness Goals

5 Ways to Save Money on Your Home Remodel