Are single stocks too risky?

My gardening experiment went better than I expected, but not nearly as well as I had hoped. Here’s what happened:

I started out by planting two Roma tomato plants, one potato (which I didn’t even think to cut up), probably a dozen carrot seeds, some corn seeds, and peas.

The peas were the first to go. Only one of them even sprouted, and the sun took care of it. Likewise, only a couple of the carrots sprouted, and they also died. I replanted them and a couple more came up. One of those is still growing, so we’ll see.

The potato took off and turned into a beautiful plant, but then one day I came out and it had gone from beautiful plant to a completely wilted pile laying flat on the ground. I have NO idea what happened with that. Any ideas?

The corn seemed to do well, except that it only got about 2 feet high. Still, the plants had ears growing on them and everything, so I remained hopeful until recently. I picked one of the ears, which you can see here: 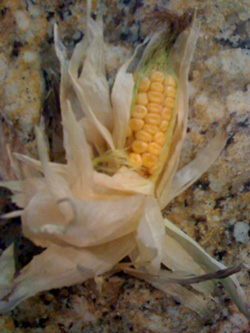 Obviously I picked it too late, but that’s because I’d never seen such a tiny ear of corn before. I didn’t imagine it could possibly be done growing. Oh well. By now the majority of the corn plants have turned brown. There are still a couple that are growing, so I may still get something from them.

And then we come to the tomatoes. One plant died without even flowering. The other plant flowered and began to have tomatoes on it. But…most of them had what (I think) may be blossom end rot: 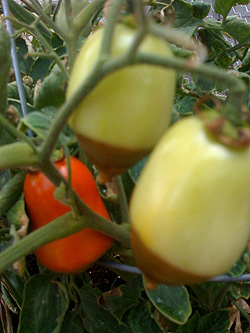 There are still a few tomatoes on that plant that look completely healthy, so maybe we will yet get a few. I hope so anyway.

Now as dismal as this might sound (with no yield, as of yet, and lots of money spent) I’m only somewhat disappointed. I’ve learned quite a bit about what I need to learn, and what I need to do and not do next time. Plus many of my plants DID grow. And I kept them alive for months! That’s a minor miracle in and of itself ;)

I also enjoyed visiting the garden every day and doing my best to take care of the plants. I’ll have to check with the extension office to be sure, but I think we have two growing seasons here, so it won’t be terribly long before I can try again.