I wrote yesterday about the first method I use to track income and expenditures. Here’s the second method:

When a month is over, I can transfer the total expenditures and total income from my spreadsheet to my wall chart. The wall chart idea comes from one of my favorite books, Your Money or Your Life

by Joe Dominguez and Vicki Robin.

suggests leaving a lot more room at the top of the chart than you ever thought you’d need, since generally people’s income goes up more than they expect once they start paying attention to their money.

The chart hangs on the wall inside our closet, where I see it at least twice a day. (That’s the reason it’s a paper chart and not a spreadsheet — I want to be reminded of it a daily basis, and I don’t feel like printing out a new spreadsheet every month.)

Once you have the chart set up, you plot two points each month and draw lines to them from the previous month’s points. I use red for expenses and green for income. I define expenses are anytime I pay something out, and income as anytime someone sends me money that wasn’t mine to begin with. I also make a note on the chart to indicate any unusual expenses or income, so that I don’t look back and wonder what the heck that spike was. (So my chart has a note on one of the lines that says “bathroom remodel”, etc.)

Here’s what the data on my chart looks like for the past few months: 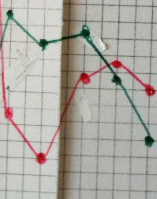 It makes it easy to see that my expenses were less than my income for the first three months shown, and that for the past couple of months the reverse has been true. (Sadly.) You can also see that both my expenses and my income have fluctuated a lot recently, which is a change from the past. For awhile there they were both pretty steady.

The point of the chart is similar to the point of the spreadsheet: it helps you pay attention. But it also helps you visualize where you’re going and where you want to be. You see, once you plot the points, the space in between the green & red lines is either money you can save and invest, or a deficit. (Depending on which line is on top.) The goal is to have the green line be on top, and the space in between be money available for savings or investments.

This chart, more than anything, has changed how I interact with my money.